Unboxing a Prusa i3 1: overview.

After overcoming a valley in my enthusiasm chart, I have finally decided to use some of my free time to finally start to assemble my additive printer. I’ve decided to document the unpacking process because:

The exterior of the package was a little roughed up from the long trip and that had me worried for a second. But surprisingly all parts seem to have survived perfectly and – I’d even go as far as to say that – they look pretty robust and well made.

Bellow is an animation showing all layers contained within the main box. I have numbered each internal box to be able to relate them to the individual photos of the contents of each box:

Notice that between box 5 and the structure parts (6) there was also a nice sheet of polyethylene foam cushioning everything.

Everything was very well packed in individual ziplock-like bags that, in turn, were placed inside cardboard boxes, grouped to optimize space use. The boxes were tightly fitted into the spaces formed by other boxes, while all remaining gaps were filled with polyethylene foam sheets. I must say that this Michael-Johansson-kind-of-packing made the experience become a real treat!

Click on the smaller images for the detailed description of (what I believe to be) each element:

4: Extruder (with motor) and coolers. 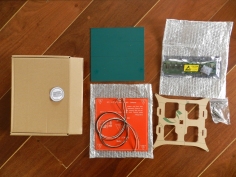 5: Base plate, heated bed, controller board and base plate structure. 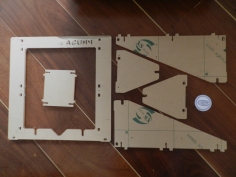 I only found one small issue: the linear bearings were absolutely soaked in machine oil and, even though they were inside two layers of plastic, the oil leaked. Since the printer has been sitting in a box for almost a year, all parts that have been sharing the same box now smell of oil. Luckily the box absorbed most of it and nothing else was contaminated, so no big deal.

I also took closer photos of relevant details that can’t be properly seen in the above photos: 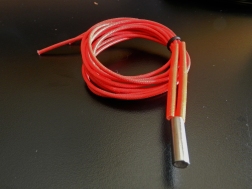 The extruder (first image above) design is surprisingly sturdy, different from every other set-up I’ve seen around the web. Its motor is encased within a solid aluminium bracket and the fact that it doesn’t include any plastic parts near this heat-emitting area, seem like a solid advantage.
From what I could gather so far, it seems that during the printing process the plastic filament (represented in red) is trapped between a grooved pulley and a sharply sprocketed cog (attached to the motor) and then is force into the heated nozzle.
To add a new filament, a hinged element – seen closer to the camera in the image – is pressed and, while the spring is squeezed, the pulley is lead away from the cog, allowing the new filament to be accommodated adequately.

The circuit board is a Melzi Ardentissimo 1.0/2.0 eBay Hybrid (that has a an architecture based on the Sanguinololu) and, I’m pleased to say, looks well finished with pretty decent soldering work. It features a ATmega1284P microcontroller, 4 on-board stepper motor controllers, 3 terminals for endstops, 2 for fans and pretty much everything else needed. It also includes a slot for a mini SD card. Very exciting!