After much researching, deciphering and documenting, I understood enough of the 3D printer design so that I could start assembling it with confidence. If you read other posts, you may remember that the assembly manual was already a topic of discussion:

There’s a step-by-step assembly manual included in the CD, customized for this specific Prusa i3 derivative design, so it doesn’t seem like there’s anything to worry about in this department.

The notion that the document was going to make the process easier was flawed, though, as I ran into several issues while studying it in more detail:

I get that some of these changes were deliberately made to cut down costs, but accurate assembly instructions are the least I expected!

NOTE: Although the design isn’t exactly the same, the Prusa i3 Acrylic (manual) design enough similarities with my printer that it can be used as complementary reference, filling a lot of the ugly gaps left by Heacent’s manual.

After realizing the product I purchased wasn’t as well polished as I initially thought it was, I decided to account for and inspect every one of the provided part by comparing them to the ones described in the manual. Even so, because of the already mentioned unreliability of the manual, I still expect to find more missing parts during the actual assembly.

Fasteners were, of course, the toughest parts to check as there many individual types and, in total, a large number of them. The first 3 images bellow show the contents of the four bags of fasteners contained in the kit:

Fans and heated base fasteners.

As you can see, there are quite a few missing fasteners. Apart from the nylon washers, and the M5 x 18 screw – that can be replaced by the unused M5 x 20 screw without issues – there are three other types of items missing!

The tough part now is to find a retail seller in my area that has a good variety of such products and accepts small purchases.

The 3D printed parts were also thoroughly inspected and some issues also became evident.  First I found some plastic drooping on parts passed through by horizontal holes (top-left picture bellow). Maybe the last layer of the hole was too wide and some supporting structures were required; maybe the extruder was too hot and the plastic was too fluid. Regardless of what caused the problem, the solution was quite simple: I used drills – with diameters equivalent to the original gap/screw sizes – clamped by locking pliers to improve the grip (bottom-left picture bellow) and it worked very well! 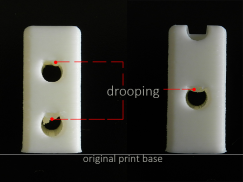 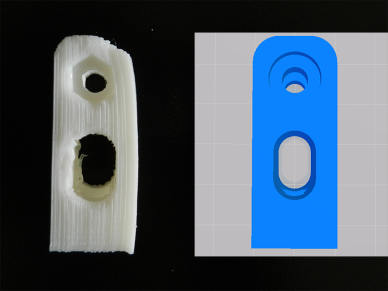 The last image of the above gallery show a problem that couldn’t be solved by any quick tricks. The first printed layers in this part became partially detached from the heated bed but the printing continued, causing it to look bent on one side with squished layering in the middle. Although the upper face is surprisingly straight, the piece is unusable.

Luckily someone had already went through the effort of obtaining all custom STL files from the manufacturer and made it available on Thingiverse: